I am showing these two images together because not only are they connected geographically, but the attempt to shoot one led to the discovery of the other.

As usual, I was cruising San Pablo Avenue looking for interesting material, when I saw this horse mural. 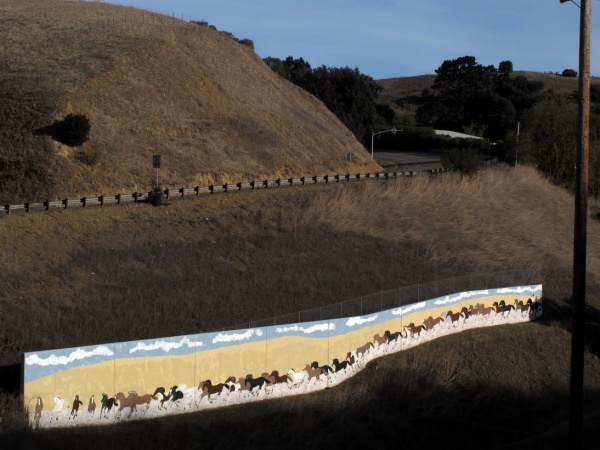 I took several shots of it, but the land was fenced off, and I couldn’t really get the head on, wide angle shot I wanted.

This mural may not look that impressive in the photo, but when you are standing there, it is quite something to see. The fenceposts behind it are 4-6 feet apart, which would make the mural wall over 100 feet long.

Like most of my work, I let this image marinate for awhile, revisiting it from time to time to see if it had staying power. At the time, I was in a camera club, and I knew that if I were to show this image to the members, the first comment would be a criticism that I was just “photographing somebody else’s art”. I couldn’t argue with that position, but that really wasn’t why I liked it. Although it is a bunch of man made unnatural rectangles, to me it fit in with the landscape.

Months later (post rainy season, grass was now Green), I decided to return to the scene, and get the best shot possible. That road in the photo is San Pablo Avenue, and I drove up it to the next driveway, and asked permission to hike down into the gulley in order to get the shot I wanted. The property owners told me that the mural wasn’t on their property, but I was welcome to try. It was pretty steep, and overgrown, and when I made it down to the bottom, there was another fence that prevented me from getting anywhere near close.

My younger, more rebellious self would have just hopped the fence, and kept going, but these days, I try to have more respect for other people’s property, and besides, I pictured some rancher chasing me through that gulley with a camera flapping and a tripod over my shoulder.

I retreated, drove further up the hill, and asked another neighbor who the landowner was. He gave a bit of background on the mural and the local artist who created it, and told me that the property owner lived across the adjacent road.

I drove back around to the end of a secluded, one block long dead end street, wrote a note with my contact info, requesting permission to climb the fence, and asking the property owner to call me.

I put the note in their mailbox, turned around, drove to the end of the block, and saw this other mural at the rear of a back yard. I thought it was a bit of interesting folk art (with the same stretch of San Pablo Avenue in the background), so I took a couple of shots through the open passenger window of my car. This took less than a minute. 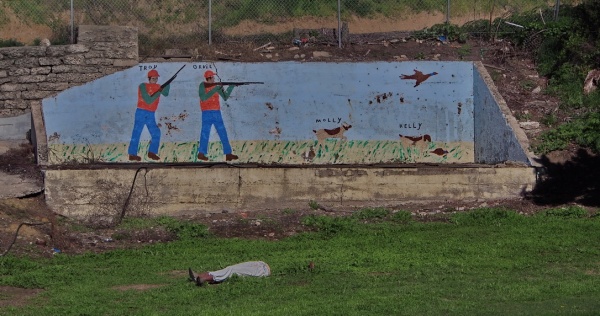 It was only when I later looked at the image on my monitor, did I see the body in the foreground.

I can’t look at this photograph without thinking of those American Civil War battlefield photos taken by Mathew Brady.

I am proud to say that this photo was just chosen to be in a Street Photography show at the Los Angeles Center of Photography, running from February 3-March 10th, 2017.

Here is a link for more info—–

I went back to the horse mural, and walked along the fence in front of it, and took a shot that I am pretty pleased with- 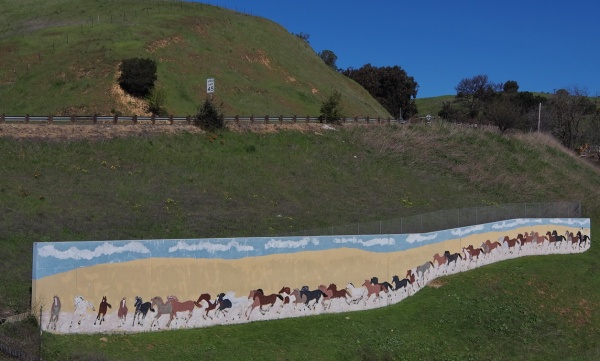 Some days the fish don’t bite, other days, they jump right into your boat.