I wrote about these two images before, They were both taken on the same July 4th-Indepenence Day in the United States, a day for flag waving, fireworks, and politicians making speeches about freedom and Democracy with a capital “D”.

I shot this image four or five times over the course of a year, and was never satisfied with the results. Because it is inside a building, most attempts would give me enough shadow detail. I needed enough light coming in from the late afternoon Sun to illuminate it for me. But that same afternoon Sun created a ton of glare and reflection off of the window glass. On this day, I think I found the remedy to those problems by pressing the end of my lens directly on to the glass.

The irony (to me anyway) is that the photo was taken on July 4th and the tablet that Lady Liberty is holding is inscribed with the date of the American Declaration of Independence- July 4, 1776.

I got the shot, and as I drove away on San Pablo Avenue, I found this second situation. In order to get the whole image, I had to make a U turn and shoot from across the street. I am an old Alley Cat, and street life generally doesn’t faze me, so normally I would park and wait for a break in traffic so I could walk out into the street  and fill my viewfinder with the image. However, this corner is about as funky as can be, and the small grassy area where I had to park was filled with quite a cast of characters, most of them probably harmless, some of them probably homeless, but there were some bad dudes there (the City of Oakland has since closed it down by fencing it off). I took the easy way out, and just rolled down my window, and clicked off a few frames.

Here’s the inside joke. Aside from the American Flag, the car is a Rambler American, something that may only be obvious to a 1960s motorhead like me.

It has been said that the Statue of Liberty really is the symbol of the beacon of hope the United States represents to immigrants. There is a poem about this hope displayed there, the most famous lines from it are-

“Give me your tired, your poor,
Your huddled masses yearning to breathe free,
The wretched refuse of your teeming shore.
Send these, the homeless, tempest-tost to me,
I lift my lamp beside the golden door!”

I have to say that “Liberty Behind Bars” seems to take on new meaning with the actions the Trump Administration took this week.

I am showing these two images together because not only are they connected geographically, but the attempt to shoot one led to the discovery of the other.

As usual, I was cruising San Pablo Avenue looking for interesting material, when I saw this horse mural.

I took several shots of it, but the land was fenced off, and I couldn’t really get the head on, wide angle shot I wanted.

This mural may not look that impressive in the photo, but when you are standing there, it is quite something to see. The fenceposts behind it are 4-6 feet apart, which would make the mural wall over 100 feet long.

Like most of my work, I let this image marinate for awhile, revisiting it from time to time to see if it had staying power. At the time, I was in a camera club, and I knew that if I were to show this image to the members, the first comment would be a criticism that I was just “photographing somebody else’s art”. I couldn’t argue with that position, but that really wasn’t why I liked it. Although it is a bunch of man made unnatural rectangles, to me it fit in with the landscape.

Months later (post rainy season, grass was now Green), I decided to return to the scene, and get the best shot possible. That road in the photo is San Pablo Avenue, and I drove up it to the next driveway, and asked permission to hike down into the gulley in order to get the shot I wanted. The property owners told me that the mural wasn’t on their property, but I was welcome to try. It was pretty steep, and overgrown, and when I made it down to the bottom, there was another fence that prevented me from getting anywhere near close.

My younger, more rebellious self would have just hopped the fence, and kept going, but these days, I try to have more respect for other people’s property, and besides, I pictured some rancher chasing me through that gulley with a camera flapping and a tripod over my shoulder.

I retreated, drove further up the hill, and asked another neighbor who the landowner was. He gave a bit of background on the mural and the local artist who created it, and told me that the property owner lived across the adjacent road.

I drove back around to the end of a secluded, one block long dead end street, wrote a note with my contact info, requesting permission to climb the fence, and asking the property owner to call me.

I put the note in their mailbox, turned around, drove to the end of the block, and saw this other mural at the rear of a back yard. I thought it was a bit of interesting folk art (with the same stretch of San Pablo Avenue in the background), so I took a couple of shots through the open passenger window of my car. This took less than a minute.

It was only when I later looked at the image on my monitor, did I see the body in the foreground.

I can’t look at this photograph without thinking of those American Civil War battlefield photos taken by Mathew Brady.

I am proud to say that this photo was just chosen to be in a Street Photography show at the Los Angeles Center of Photography, running from February 3-March 10th, 2017.

Here is a link for more info—–

I went back to the horse mural, and walked along the fence in front of it, and took a shot that I am pretty pleased with-

Some days the fish don’t bite, other days, they jump right into your boat.

I photograph a lot of signs.

Even within the context of this dinky blog, there are a number of posts that feature images of signs, (Body Parts, Don’t Eat Plants, etc.), but there are quite a few more sign images in my collection.

Because I also look at graffiti and bumper stickers, I suspect that part of the attraction stems from my love of reading.

When I was a kid, every day I would come home from school and read the St. Louis Post Dispatch, our afternoon paper, (from the inside out, starting with the comics, excluding the Sports Section).  Page three had the local news, and often there was a simple photograph- children making snow angels or some type of visual pun, juxtaposition. They often worked like this

Many of the signs I photograph are “Jack of All Trades” type signs, and many of those are food establishments that seem to offer something for everyone-as Jed said to Jethro, “That’s a good idea son, it’s not a good idea to not put all your eggs in one basket”. 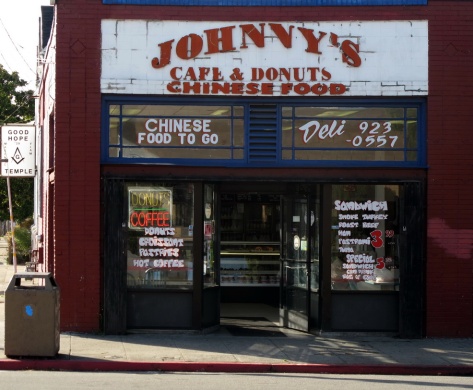 As I recall, the sign on the back of the van said “Fart Smeller”. Unfortunately, it was obscured by the bicycle, and I have to say, with a sign like that, I didn’t want to get too close.

I love this address sign; it is a piece of folk art

Graphic signs are their own version of folk art-they are both informative and symbolic, and no reading is required

No wonder orthodontia is so expensive, it is labor intensive.

Although a bit more upscale, this jeweler gives the same message. 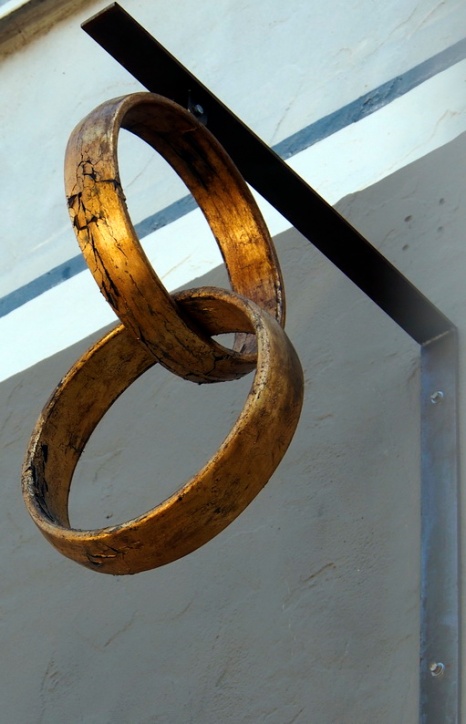 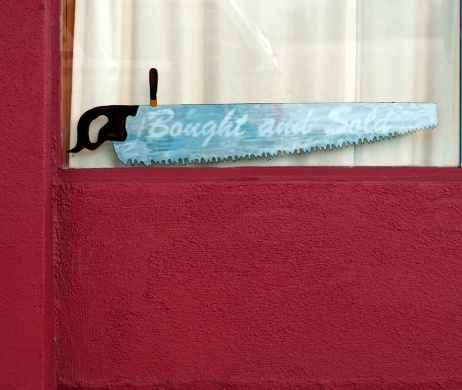 and this guy sharpens them

I never thought I would see this in Berkeley. 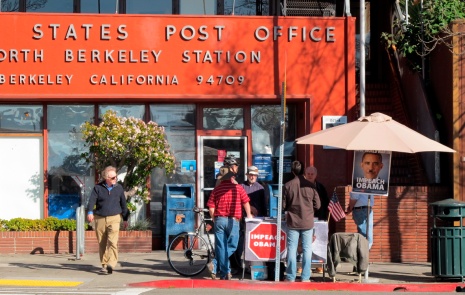 Some signs make you wonder what is going on, but may be you don’t really want to know 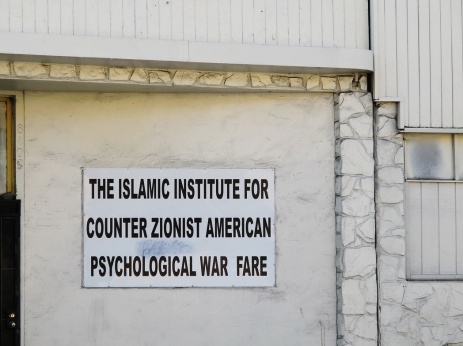 I didn’t take this photograph, it was in Newsweek Magazine after Hurricane Katrina hit New Orleans. But I saved it not only because it is a great sign, but also because of the way the message is conveyed.

A bit of graffiti

I was in San Francisco for a photo seminar and took this picture during a walk through North Beach. During the seminar, the speaker was showing some photos that he took during his visit- including the same sign! I’m not surprised it’s popular since it spells out two basic human needs (peace and love) plus beer and pizza-two of the four basic food groups. 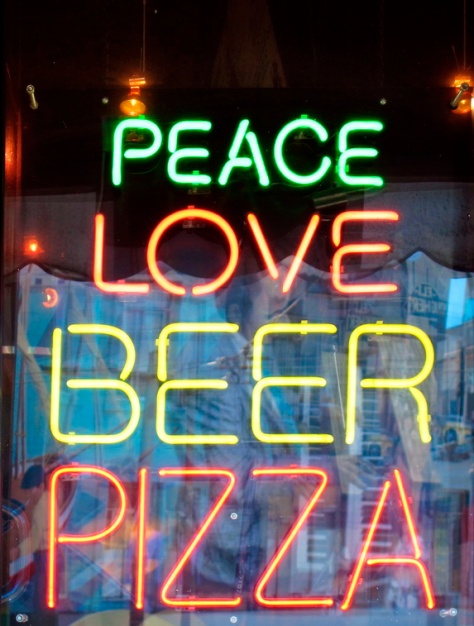 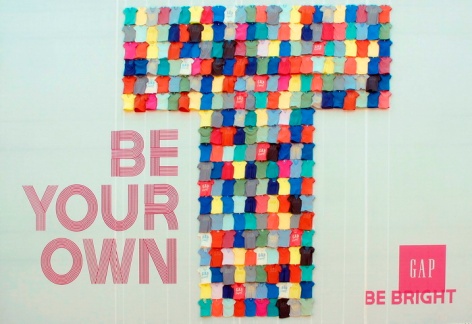 I don’t know how to classify this one- is it a custom car or one big bumper sticker?

Since those photos were taken, I have seen this vehicle around town, only now there is a splash of color-I guess the owner wanted to draw more attention to it

I know it’s a lousy photograph, but I was in a moving car at the time (not driving)