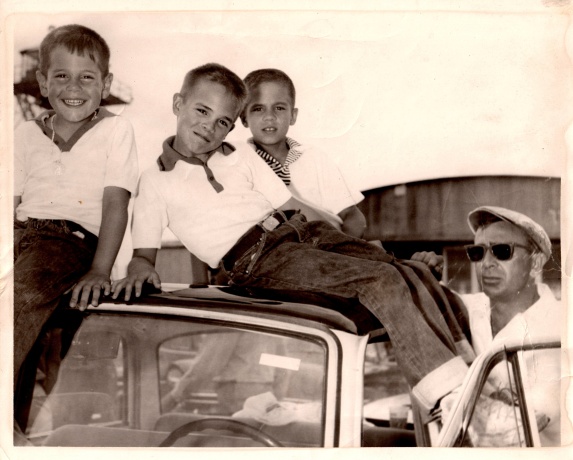 In the 1950s, my Father imported and sold Fiats, I have previously blogged about it here-

He sponsored a road racing version of their sports car, and one Sunday, he took my Brothers and me to watch a race.

The sports car was named the “Spyder”, we are sitting on the roof of one watching the race.

The “Abarth” was the racing version.

Here is another pic of the Spyder, decked out for my 1960 Grade School picnic-

My interest in photographs preceded my interest in photography. In the 1950s, my Father brought home a copy of a LOOK magazine book titled something like “A Year in Pictures”, and I kept this book on my nightstand for the longest time, continually leafing through it. To this day, I remember a photograph of a pair of Siamese Twins, joined at the top of their heads.                   This was engaging stuff, the power of photography to explain our world to us in a universal manner.

While I now understand the controversy surrounding it, when my favorite teacher loaned me her copy of ” Family of Man “, it seemed pretty remarkable to my 11 year old self.

I have an interest in things scientific, and am a problem solver, so I learned to appreciate both the magic and the “behind the scenes” processes I learned about  in images like “Helicopter”,  “Transformation of Energy”, and “Bullet Through Apple”.

Years later, while traveling in Europe, I bought a basic 35mm rangefinder camera that had no light meter, nor even any batteries. I learned to judge exposure according to the pictograms on the inside of the film box (Cloudy Bright, Open Shade), but didn’t think of myself as a photographer with a capital “P”, only as a tourist shooting snapshots.

When I returned to the states, everybody was doing something crafty-a couple of my buddies were in Art School studying “Media” A roommate had a darkroom, and photography as an activity utilizing mechanics and chemistry in order to express oneself started to make sense to me, so I dove in.

But I didn’t study Media.

Instead, I learned photography by reading everything I could get my hands on, and by looking at a lot of photographs. Photography as an Art Form didn’t really gain traction with me, but the life of the Photographer seemed pretty cool. The LIFE and LOOK crowd seemed to have good jobs, and what could be better than National Geographic? The photo mags ran articles about what special gear those folks carried on assignment, and occasionally, the special setups they used to get the shot. I am a technique guy, I loved those tools and tricks.

I was off and running.

I enrolled in a couple of Community College photo classes that were designed to stretch my creativity. My first couple of projects were flops-high on concept, but not in execution. I think most of my work was pretty mediocre, but two class assignments really stuck with me.

An Andreas Feininger image introduced me to a storytelling technique of using selective focus to make an image more dynamic. I used this to make an image that was made into a poster for the School’s Automotive Technology Department- it was a real photo assignment “commissioned” and accepted by a third party.

Another class assignment was to shoot three rolls of film, then print and display the five best images that came out of that 108 exposure shoot. I have seen variations on this exercise (shoot geometric shapes, shoot only one color for a week, etc.), and still think these exercises are quite valuable.This is a recent “geometric” version. 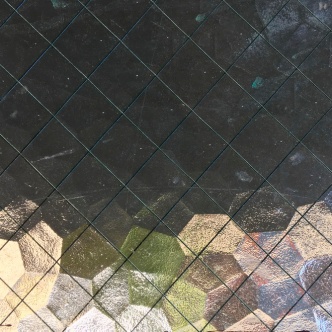 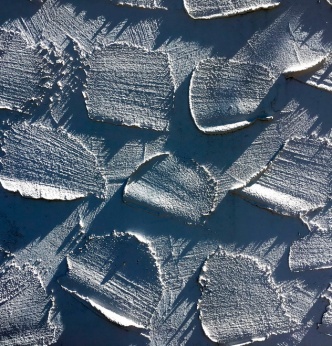 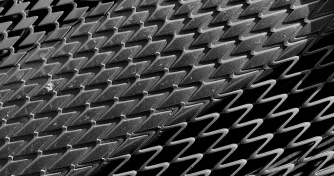 As can be expected, there were quite a few dogs in the batch of 108 (probably over 100), but a few were photographically interesting, and one “happy accident” double exposure was submitted to a Student Show, where it won first prize!

It is a special feeling to know that total strangers respond to your work (and I don’t mean “likes” on Instagram.

A talented graphic artist brought me into his circle, and I did some of the most creative work ever (my work, his creativity).

I did some product photography, and a few portraits, but didn’t really have the eye for it. I shot a couple of weddings, and think I did OK, but really didn’t have the stomach for it. I hung out with a high powered Rock Band, and that was fun, but they wound up with the girls, and at the end of the day, all I had was a bunch of negatives.

I even got a gig as the still photographer on a full length motion picture.

Little of this was creative, none of it was Arty. I seldom made anything out of thin air, and I am not a concept guy.

However, I was getting pretty good with recording what was in front of my camera- less as documentary, perhaps closer to Journalism, or what Walker Evans called “descriptive photography”. I am beginning to call it “observational photography”.

I enjoy people watching, and have always found myself in the company of “characters”. Although there is not often a lot of people in my photographs, I find the product of being Human to be the most interesting thing to point my camera at. I often went to New Orleans for Mardi Gras, and in the French Quarter street theater is a way of life. I practiced what came to be called “Street Photography”, but now those guys are formalizing a definition of that type of shooter (and taking the fun out of it), so I am moving away from the category, but my guiding principle is still

“….if you are standing on the sidewalk, and saw three Chickens, a Horse with a Purple tail, some bicyclists, and a Peacock approaching, you would have to think,

I like to think I had some decent work back them, but we will never know, as all of my work was destroyed by the 1991 urban wildfire that consumed a large part of the Oakland and Berkeley Hills.

I still view photography in terms of the image that you capture, rather than something that is massaged in software. Although there is not often a lot of people in my photographs, I find the product of being Human to be the most interesting thing to point my camera at.

That was THEN, next I will talk about NOW.