It’s a poor craftsman that blames his tools.

I have always been a voracious reader, and when I take an interest in something, I obsessively consume information about it.

I have also always been a little geeky. As a young reader, I read Popular Science along with the Hardy Boys.

I became interested in both woodworking and photography at about the same time in the 1970s, and learned most of what I know by reading the best information I could find, and distilling it to make it my own .

Photography already had both significant “technology” and “art” components, and there was a broad spectrum of popular materials (we called them “magazines”) which appealed to  just about every aspect of photography. I usually looked for “Tips ‘n Techniques”, but all of those magazines were supported by gear advertising, and each issue would usually have at least one or two gear reviews.

However, woodworking evolved out of the industrial arts field, and the books and publications up until that time consisted of articles more in line with “Power Tool Maintenance” and “How to Build a Grandfather Clock”, rather than personal expression or interpretation.

I would credit Fine Woodworking Magazine with both expanding and popularizing the national dialogue on the topic. They brought in a lot of that traditional stuff, but also showed us studio artists who were making art furniture, often by bending a few rules.

However, I can testify that the woodworkers exhibited the same gear obsessions, and the same brand loyalty/snobbery as the photographers do.

By the way, I don’t think these two fields are alone-I am certain that the foodies and their chefs, along with rock climbers, and lapidary guys are having the same discussions about artisan salami, paring knives, rappelling devices,  and which faceting devices are superior to all others.

It is acceptable and understandable that a camera/tool of a certain caliber might (in the right hands and in the right circumstances) squeeze out a better result (or make it easier to get that result). But for the most part, and for most of us, we are buying into a fantasy, one that I suspect is driven by our consumer culture, something difficult to escape.

Beginners, hobbyists, and enthusiasts tune in to the conversations the “experts” are having, and seem to equate the high quality results that expert is having with the gear they are using. We seldom step back and think, “Maybe that person got there because they spent years honing their craft”. In truth, 98% of what got them there is a combination of drive, discipline, skill, and talent. The other 2% might be their choice of gear.

There is a story about Charlie Parker, the great jazz saxophonist. It seems that his horn got stolen while he was traveling (some say he sold it to buy drugs). He got his hands on a plastic horn, showed up at the gig, and legend has it that he played his ass off that night.

I am not trying to say that the choice of camera doesn’t matter, of course it does.

It is said that the best camera is the one you have with you, and in that perspective, we are all fortunate to have cameras in our phones. In a pinch, Cartier- Bresson probably could have made a cell phone camera work for him, but there is no way that Ansel Adams or Edward Weston could have done the work they are famous for.

What particularly interests me is thought provoking dialogue and/or expansion of my understanding of photography.

I am pretty sure am pretty sure that each of those bloggers will tell you that when they discuss gear, the number of readership comments jumps dramatically. If the author states that their favorite portrait setup is micro 4/3 with a 42mm f5.6 lens, you can predict that ten guys are going to jump in agreeing, disagreeing, arguing their own point , and sometimes missing the author’s point, which is, “this is what works for me“.

I am not really interested in gear, but sometimes wind up reading about it anyway.

For me, the image is everything. It’s not that I don’t care about razor sharp focus, sharpness, and color fidelity, it’s just that they have to take a back seat to the image.

I tested them both side by side at the Albany Bulb, a former landfill that serves as a “found object artspace” and graffiti riddled off leash dog park that juts out into the San Francisco Bay. 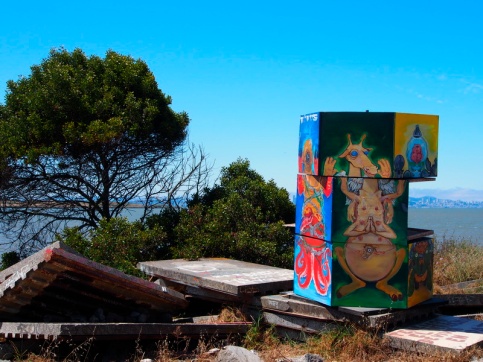 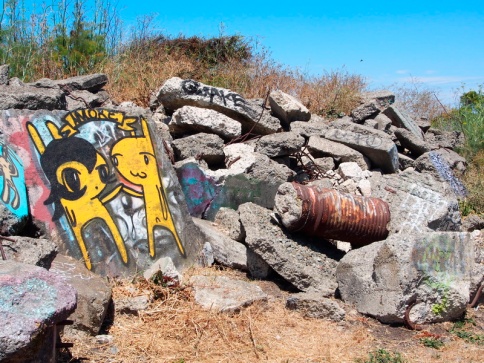 The results were unquestionable- the PRO lens gave better results.

However it was also bigger and heavier than the kit lens, and if you carry your camera with you all day, this can’t be ignored.

That lens may  have the potential to be technically better, but it was clear that the image itself wasn’t going to be any better.

I returned the lens.

It is top heavy with lens performance data, camera parts and other science (YAWN!), but I  like it because Roger is smart, pragmatic, and most of all funny. He has a diagram that illustrates the difference between a Nerd, a Dweeb, and a Geek.

Last year they had a contest that gave an award to the entrant that exhibited the most geekiness. It was hilarious.