Recently in his blog*, Blake Andrews illustrated how two photographers sometimes take very similar images. He has visited this theme before, but the current example offers a twist to the argument that the later photograph is an (conscious or subconscious) imitation. Each  of his primary examples is a Vivian Maier photograph, and while all but one do predate the second example, Ms. Maier’s hoarding of her work suggests that the other photographers could not have been influenced by her images.

One presumption a reader could make is that this is pure coincidence-there are zillions of subjects, but sooner or later, two shooters will “previsualize” the same image and both will produce a similar photo. The human brain is wired to see patterns, and the creative mind is just putting a rectangle around those patterns. Some of us have a good eye, some of us have a trained eye, but the end result is the same-seeing something interesting, and following through on opportunity.

It is possible the coincidence is just a coincidence, and the recognition is in the eye of the viewer.

Awhile back, there was a blog discussion about “American Girl in Italy”, the iconic Ruth Orkin photograph. 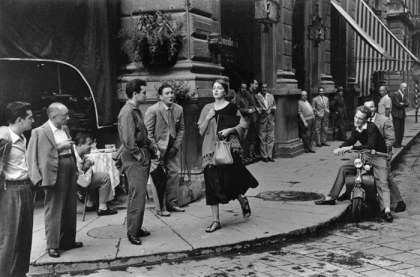 Some blog commenters thought it was staged, several have recreated it (with variants) , and there was plenty of discussion about the girl in the photo, men in general, and Italian men in particular.

My Father was Italian (Eyetalian) and my wife has an affection for all things from Italy (shoes and food tie for first place), so this photo has always been a favorite in our household. A poster of it has hung in our dining room for more than 20 years.

It was easy enough to find the girl, her identity was no secret.

In this interview**, she comments on the shoot (it wasn’t staged, but it wasn’t entirely candid either), and the time she spent with Ms. Orkin. It seems they were two young American women who were not afraid to explore a different culture. I did no other research, but Ninalee Craig, the “Girl”, implies that the two enjoyed their time together, that the men were not disrespectful.

A couple of years ago our daughter went to Italy, and stayed with a family near Naples.

Apparently, the local kids like to hang out at the piazza, and one day, this version of American Girl in Italy” showed up on her Tumblr page, with the caption “Italian Boys ha ha”.

Was she consciously or subconsciously imitating this photograph she grew up with?

She was just an American Girl in Italy.

*I don’t know how to do the “embed the link in the word thing”, but want to point to Blake Andrews’ blog, “B”-

Used with special permission of the Ruth Orkin Photo Archive